Timber is used in the construction of every house and naturally, it will die down if it is not looked after properly over time. If it is maintained well, it will last longer. Wood over time invites dust and other particles and shows some signs of ageing. Thus the wood rot and mould develops due to various atmospheric conditions and slowly leads to wood damage. The mushroom-like fruiting bodies are often seen in the plasters or painted walls as a result of this. They are the first visible sign of woot rotting and they produce numerous spores which are normally brick-red in colour. It is important that you detect these signs at the initial stage so that you can better protect your wood. Here is how to detect wood rot and mould-

The reason behind wood rot

The fungus is hugely responsible for the timber rot.  Anything over the recommended moisture content of 20 percent, will pave the breeding ground for fungus which eventually causes wood rot. Apart from moisture, another thing favourable for fungi is temperature anything between 40°F to 100°F. Oxygen and food source are also required for the fungus to develop.They look similar to small plants which are in fact organisms.  As they depend on others to produce their food, in other words, they extract nutrients from the wood and often inhabited in the wood. For example, mushrooms which grow abnormally in every rotten wood. 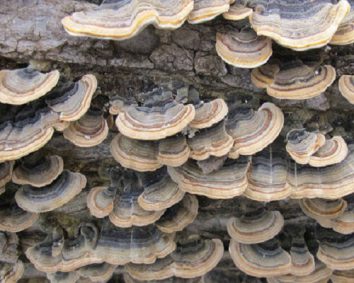 The timber rot you will see typically on boats and plants and in some type of musical instruments, made from wood. The wood inherently contains some amount of moisture and hence prone to rotting.

You can detect them in buildings with poor maintenance, for example in old properties, or there is water intrusion for some reason. In the initial stage, it is difficult to distinguish it from the wood rot fungus because they look almost same but in later stages, they are easy to distinguish because of the appearance they created in woods. The dry rot fungi can spread to other wood also over time, and this ability to spread is one of the main differences between dry rot wood and wood rotting fungus.

Wet wood rot is mostly found in houses which cannot destroy wood but creates a spongy texture. They appear either brown or white rot. The dry timber rot is treated through certain environmental controls, for example, isolation and ventilation, which minimize the damp, unventilated conditions.

Wet rot is a type of timber rot mostly caused by damaged paint finish on the timber, which in turn allows the wood to absorb excessive moisture. Here the damage is limited, though it can affect other areas like the plasters or the decorations as well to a slight extent. The paint might look ok, but sometimes the damage is from inside the timber. 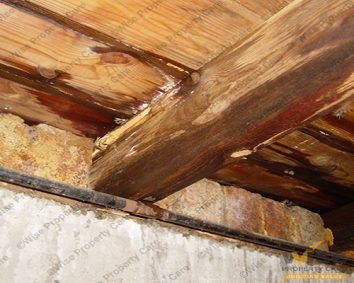 Wet wood rot can develop in the kitchen sink, bathroom basins, shower and washing machines where the risk of leakage of water and it may go unnoticed. Always address the problem at a structural level so that it eliminates the possibility of reoccurring. Replacing or cutting down the damaged areas are the solutions you can apply to your timber rot. Now a day, some preservative tablets are also available which can be inserted into the timber to protect it from any damage.

READ ALSO:  What to buy between charcoal and gas barbecue?

Prevention is necessary because if not treated damp walls may cause a serious problem as time passes. Seek professional help to avoid any grave situation later. Make your wood clean at regular intervals, keep away soil and another debris from the bottom of the wood.

The wood rot is classified as dry or wet though this is a misconception because it indicates that only dry wood is prone to rot. Practically it is not like that because all rotten wood has been wet at some point in time. Brown rot is another term used in the field of rotten wood. This happens when the infected wood turns brown. This type of timber rot is commonly seen. Here the cracks develop in the wood against the grain and cause it to split and crumble down. In extreme cases, the rot takes out all the nutrients from the wood and it will look dry and powdery.

This is another form of wood rot which makes the affected wood to turn white. It will progress from greyish-white to yellowish. When they fully develop, the wood will become spongy.

This is another type of timber rot which is not usually seen inside the house. Though they can attack wood shingles in wet climates. Certain types of timber rot are there which will present for a long time in the wood and cause severe damage. While some others develop “fruiting bodies” on the crust of the wood.

How to detect mould

Mould is another form of fungi that cause wood rot. They also grow when there is moisture content. They may cause discolouration, but they cannot decay wood. 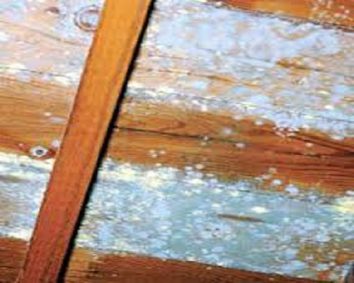 credit image
how to detect mould

What they do is that they increase the absorption quality of wood which further make it susceptible or vulnerable to fungal growth. The sap stain fungi look almost like a surface mould. However, it is also not capable of damaging the structure of wood, it only changes the appearance. They will stop growing when the wood dries out. It indicates that the wood was wet at some point of time, but not now.

The dry rot fungus is dangerous because it can cause serious damage to the wood. They develop in places where there is less ventilated with high moisture content. They develop so fast that they spread to the whole wood before they could be detected. Heavy chemicals are used to destruct them which ultimately causes more damage to the wood structure. People with asthmatic conditions should have stayed away from dry rot fungus. They are harmful.  However dry rot fungus will sustain as long as there is moisture, otherwise, they would not survive without moisture.

Knowing in advance about how to detect wood rot and mould help you to protect your wood furniture at home.