Almost a year ago, Orient launched a refreshing and innovative product in the ceiling fan market called the Aeroquiet. We even had the chance to review the product first-hand, and must we say, it really impressed us. Check out our review of the Aeroquiet here.

This year as well, we were invited to the Orient Electric media launch. The event was held at Le Meridien, New Delhi on 16th of January, 2018 and the highlight of the event was the new ceiling fan itself and Orient’s latest report.

The event started with introduction from the emcee followed by a video highlighting the capabilities, strong positioning, diverse portfolio and global coverage of Orient Electric.

Shortly after the video, Rakesh Khanna, CEO of Orient Electric presided over the stage and addressed the gathering (of approximately a 100-125 people) with a welcome speech. Mr. Khanna briefed the gathering and touched upon the company’s positioning in various segments, including 2nd largest market share in the LED bulbs segment.

Rakesh then invited Atul Jain, Sr. VP and Business Head, Fans, to lead the rest of the event.

This is where we started with the real interesting news, starting with Orient’s exclusive partnership with Amazon India to launch the fans online right around the same time as offline & retail stores. It was followed by a video of the Aeroquiet (Aeroseries) fan and the revolutionary segment of super quiet, superfast ceiling fans the company had carved out for itself.

We finally get to see the new ceiling fan in flesh: The all new AEROSTORM, the name supposedly inspired by its high(est) air delivery.

Right from the first look, you can see that the Aerostorm’s design means serious business. The fan has a refreshingly new look, while also borrowing some features from its predecessor, Aeroquiet.

With just one look, you’ll immediately notice the most prominent change (feature) of the new Aerostorm fan – it’s plane like winglet design. The winglet design at the end of the blades helps in dissipating the vortex around the blades, thus, making it more efficient and fast at minimal noise.

Aesthetically, the Aerostorm looks minimal yet contemporary and enhances any household setting. You can immediately notice the premium-ness of the fan thanks to its high-gloss PU finish, 100% rust-free blades, and, man, those curves. Its design is such that it clearly becomes one of the most exquisite items in the room.

The Aerostorm has a revolutionary new design, the likes of which we’ve not seen in any ceiling fan before. The fan comes with an aerodynamic winglet and aerofoil blade design for optimum thrust and air delivery. The new Aerostorm has been rated with the highest air delivery of 300CMM at an impressive speed of 300 RPM. To put things into perspective, a standard household ceiling fan delivers only 140-160CMM of air volume at best.

The 100% rust-free, curvaceous blades have also been aerodynamically profiled to minimize drag and maximize thrust. But higher thrust also means higher pressure difference between the upper and the lower parts of the blades, which in turn generates vortex and noise. This is where the winglet technology is useful. It drastically reduces the strength of the vortex while maximizing the downward air flow.

Looking at the pace at which Orient is implementing aerodynamics in its ceiling fans (including Aeroquiet and Aerostorm), I wouldn’t be surprised if they launch a fan with extendable flaps and ailerons on its blades next year. Here’s some more information about the winglet technology in the all new Aerostorm.

Other than its class-leading features, the fan itself looks extremely modish and sure to get guests talking.

Commenting on the launch, Atul Jain, Sr. VP and Business Head – Fans, said, “We introduced, first of our Aero series fan, Aeroquiet last year, which got tremendous appreciation and helped us create a new category of super-premium fans and also made us the leader in the segment by taking our share in this segment from 15% to over 30% within a year. Taking a step forward, we are proud to launch the Aerostorm fan which is inspired from aerofoil design of Aircraft wings. Our share of business in premium fans has grown by 300% in last one year and the launch of new Aerostorm ceiling fan will further give it a boost.”

Atul walked us through details about Orient’s exclusive partnership with Amazon India to launch the Aerostorm online as well. “We are already a leader in online space and with our association with Amazon today, we are confident that this will help us to achieve 50% market share in the online space in this year itself,” said Atul Jain.

Orient also introduced a broad range of colours and design patterns for its Aeroquiet fans such as stone, wood, caramel, underlight etc. to offer more choice to customers.

The launch event ended with an upcoming TVC ad for the Aerostorm featuring none other than Orient’s global brand ambassador: the one and only – Mahendra Singh Dhoni. 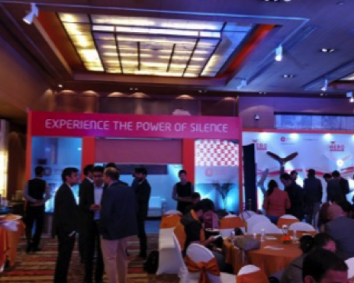 Post the launch event, the various attendees and journalists were invited to the ‘Experience Room’ to get a feel of the Aerostorm in operation. Here are few more pictures and product details from the launch event: