I’ve kinda always avoided using ceiling fans. Not because I like it warm but because of the sheer disturbance and noise they generate when operating. I’ve always preferred wall or table fans over ceiling as they are quieter and happen to do the job with significantly lesser power consumption. However, today I came to learn about a (new) product that claims to be the new standard for ceiling fans called “Aeroquiet” from Orient Electric. Here we are going to have a Orient Aeroquiet Review.

Aeroquiet. Hmmmm…..the name itself explains a lot. A little bit of research on the internet and this is what I found about the product.

“First in the Orient Electric’s Aero Series range of premium ceiling fans, Aeroquiet sets new standards in the segment with its inimitable design and outstanding performance. It features a very powerful motor for smooth operation and 3D aerodynamic design for maximum air delivery. Aeroquiet gives an impressive air delivery of 240 CMM. It has a functional minimalist design which offers the flexibility to blend it in any possible setting, be it a drawing room, bedroom or an office. Orient Aeroquiet has a sweep of 1200mm and has 100% rust-free blade made of high-grade glass filled compounded ABS which provides strength to the blades. It comes with the sturdiest 18-pole heavy motor with double ball bearing for smooth and silent operation.”

Sounds pretty convincing, right? But when it comes to cooling actual people, all electric fans work in a similar fashion, by creating what’s essentially a wind chill effect i.e the fan rotates, the wind gently strikes your skin and evaporates the sweat making you feel cooler. 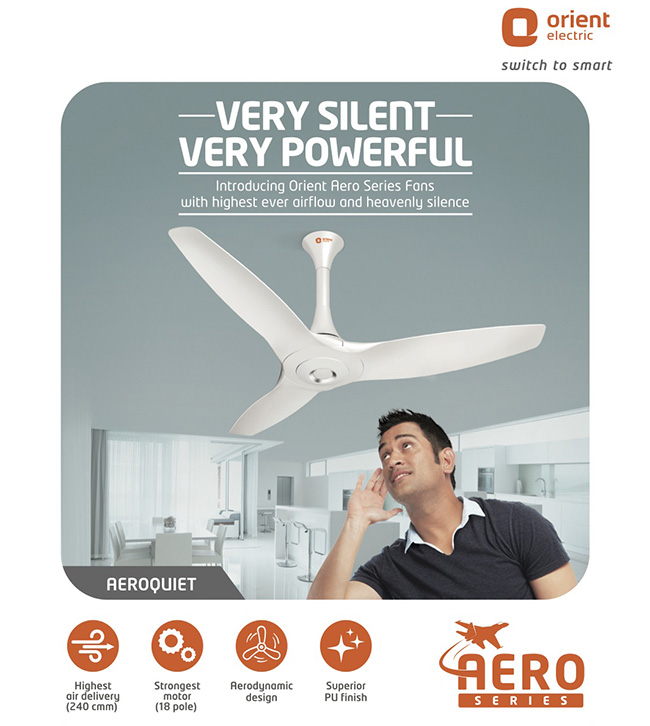 And we know for a fact that ceiling fans alone cannot cool a room. Its job is just to uniformly circulate air across the room, and in some cases, equalize the overall temperature of a room (by eliminating hot or cold spots). So, what makes this fan so unique and better than its counterparts? Not to mention its price – at approx. Rs 4500, it’s priced at thrice the value of standard ceiling fans.

So I looked into some of the features – aerodynamically, aesthetically and functionally – that make Orient Aeroquiet an electric fan superior than others. Here’s what I found:

The blades of Aeroquiet are aerodynamically designed to provide increased airflow while reducing the sound created by the blades cutting the air. A report by third party independent international lab “Josts” found that Aeroquiet makes 4dbs lesser noise in comparison to the typical fans running in our homes, which in itself is a standalone feature of this fan. Air delivery test was done by Intertek China, which reports that the fan produces a very impressive 261 CMM of air.

Additionally, in contrast to other ceiling fans available in the market, the blades in Aeroquiet are fixed to the housing motor without the use of a flange, thus eliminating the void between the blades and the motor. This arrangement essentially makes the blades and the motor housing act as a unibody fan, offering amazingly increased airflow at whisper noise.

When you look at Aeroquiet for the first time, its design looks straight out of a futuristic sci-fi movie or a concept model from Geneva Motor Show. The fan flaunts a curvaceous design topped with high gloss premium PU finish. Not sure how it’s going to endure the dusty, humid environments of Indian cities but it sure looks way swankier than any other fan out there.

Built-wise, the fan makes essentially no vibration or mechanical noise. Most of the mechanical noise in fans is caused due to poor motor or hardware. But that’s not the case with Aeroquiet. The advanced aerodynamic profiled blade designs render some serious air – 240 Cubic Meter per Minute (CMM) of airflow and runs at an impressive 310 Rotations per Minute (RPM). The fan houses a sturdy 18-pole heavy motor with double ball bearing. What does it mean? Well, all I can say is it’s fast and it’s ‘quiet’ efficient at what it does.

Bottom line? The Orient Aeroquiet is definitely not your average fan available in the market. It’s not the cheapest either. But it is impressively powerful, it’s super quiet (or heavenly silent as the manufacturer likes to put it), it’s super elegant and, compared other fans, it’s superior in terms of technology and performance. And all this does compensate for the price tag. It also comes with one of the best warranties (2 years) available for ceiling fans in the market.

Orient Aeroquiet is a must-have fan for those who want something unique and attention-grabbing for the fifth wall in their homes. It is available offline in retail stores as well as on the company’s e-commerce portal.